In the following article we will present a new vulnerability in PC-Doctor’s Dell Hardware Support Service software discovered by SafeBreach Labs.

UPDATE: After SafeBreach Labs sent the details to Dell, we discovered that this vulnerability affects additional OEMs which use a rebranded version of the PC-Doctor Toolbox for Windows software components.

In this post, we will demonstrate how to exploit this vulnerability in order to load an arbitrary unsigned DLL into a service that runs as SYSTEM, achieving privilege escalation and persistence.

The components which allow SupportAssist to access sensitive low-level hardware (such as physical memory, PCI and SMBios) was written by the PC-Doctor[2] company. The company develops hardware-diagnostic software.

Dell SupportAssist[1] is a software which is preinstalled on most Dell PCs. The software proactively checks the health of the system's hardware and software. These health checks may require permissions at a high-permission level. In order to run with actions requiring high permissions, a signed driver is installed in addition to multiple services running as SYSTEM.

In our initial exploration, we targeted the "Dell Hardware Support" service based on the assumption such a critical service would have high permission level access to the PC hardware as well as the capability to induce privilege escalation.

After the Dell Hardware Support service starts, it executes DSAPI.exe which in turn executes pcdrwi.exe Both run as SYSTEM;

Next, the service executes numerous PC-Doctor executables which collect information about the OS and the hardware of the computer. These executables are actually regular PE files, but have a different extension - "p5x".

All of these executables load DLL libraries which have the ability to collect information from different sources (software and hardware). Once the libraries were loaded we noticed the following in ProcMon (Note: We filtered the non-relevant events from the screenshot):

As you can see from the screenshot, three of the p5x executables are trying to find the following DLL files on the c:\python27 directory (my PATH environment variable):

In my VM, the c:\python27 has an ACL which allows any authenticated user to write files onto the ACL. This makes the privilege escalation simple and allows a regular user to write the missing DLL file and achieve code execution as SYSTEM. It is important to note that an administrative user or process must (1) set the directory ACLs to allow access to non-admin user accounts, and (2) modify the system’s PATH variable to include that directory.

In order to test this privilege escalation vulnerability, we compiled a DLL (unsigned) which writes the following to the filename of a txt file:

The DLL was loaded and executed as SYSTEM when we renamed it following:

The p5x modules (and most of the PC-Doctor code) are using a utility library named Common.dll, which provides significant functionality including the option to load a DLL file: 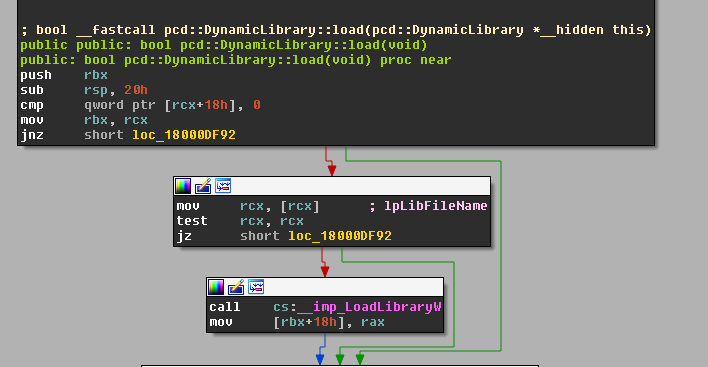 As you can see in the screenshot, there are two root causes for the vulnerability:

As mentioned above, SupportAssist is using a signed driver by PC-Doctor (which is named pcdsrvc_x64.pkms) in order to access low-level memory and hardware.

Note: Recently, a security researcher named Bryan Alexander found a vulnerability [3] in it which allowed a non-admin user to send an IOCTL and access to the hardware. Most of the driver's logic is described in his blog post.

Among the notable libraries which are loaded into the PC-Doctor .p5x executables is SysSpace.dll. This library provides a strong wrapper function to the physical memory reading functionality, called PhysicalMemory::read.

The function opens a handle to the driver and sends the relevant IOCTL to the driver. The only remaining step was to figure out which parameters we needed to send to the function.

We searched for a DLL which imports the PhysicalMemory::read function and uses it, so we could quickly understand how to use this function. We used dumpbin for that purpose.

So we opened Quip.dll using IDA and extracted the implementation which calls the function:

Let's read some arbitrary address from the physical memory.

First of all, let's check the content of this physical address with WinDbg Kernel Debugger:

Now let's load our unsigned DLL using the vulnerability, and write the output to a txt file:

As you can see, we were able to print the content of an arbitrary physical memory address easily, using the vulnerability.

According to Dell's website, SupportAssist is preinstalled on most of Dell devices running Windows. This means that as long as the software is not patched, the vulnerability affects millions of Dell PC users.

Below we show two possible ways that an attacker can leverage the vulnerability we discovered and documented above. (some of it will use the SupportAssist's pcdsrvc_x64.pkms driver).

The vulnerability gives attackers the ability to loaded and execute malicious payloads by a signed service. This ability might be abused by an attacker for different purposes such as execution and evasion, for example:

An attacker can get R/W primitives, provided by the pcdsrvc_x64.pkms driver which is an already loaded kernel-mode driver. In fact, the attacker might not need to load a driver because the previously loaded driver already gives them considerable control.

In order to access and manipulate the R/W primitives, the attacker can:

05/21/19 - PC-Doctor scheduled a fix to be released in mid-June as it affects not only Dell but multiple OEMs.

See the full value of the SafeBreach Platform.